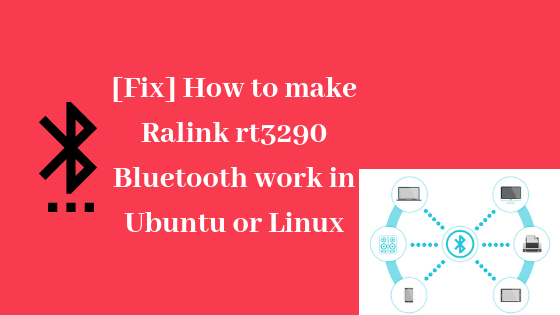 Ralink chipsets often cause problems for the Ubuntu or Linux users. Especially when we talk about the models rt3290 PCI, Rt3290 wifi or Ralink rt3290 Bluetooth (rtbth), none of them works well on the Linux distributions, Ralink chipsets have limited support towards the Linux OS.

Due to numerous bug reports Ubuntu developers have somehow fixed the ralink chipset WiFi bug from Ubuntu 18.04 LTS (following Linux Kernel 4.15) release but Bluetooth issue still remains at the top level. Earlier we have shared the fix for Ralink Rt3290 which has resolved the Wifi problem. Users who are using an older version of Ubuntu they may still encounter Ralink WiFi and Bluetooth problems. If you still want to use an older version and your Ralink WiFi doesn’t works then read our article which shows you how to fix Ralink WiFi in Ubuntu.

So, we are here with the new easy solution of Ralink rt3290 bluetooth, which will provide you the detail step by step instructions for Ubuntu or Linux OS.

Now the first step is to download the ralink rt3290 bluetooth Linux driver (rtbth-dkms) package. Download this driver file from below link:

Please Note: The current deb package of Ralink rt3290 bluetooth is only available for x64 based distribution for 32bit distors you need to manually compile the bluetooth package for more please follow this link.

After you have downloaded driver file, the next step is to install the driver package, Although you can install driver package via command line but we recommend Gdebi as it can install any debian package within seconds. If you don’t have Gdebi installer then please install it via Software center or just open terminal by pressing Ctrl+Alt+T and type the below code:

Press Enter and when the installation succeed, Open the rtbth-dkms.deb file via Gdebi install and install the package (Shown in screenshot). 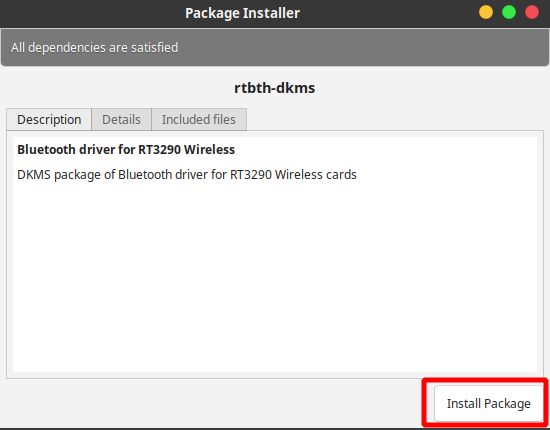 As you have completed above steps, now just after the installation finish, the next step is to check the bluetooth module- by typing below cmd in terminal

Soon as you launch this command you will get message “init complete” this indicates that your module have been successfully loaded. If the terminal doesn’t gives you any output then its advisable to please check your bluetooth area whether the ubuntu detects bluetooth or not. (If it doesn’t then read the below steps)

See the below screenshot of module loaded message 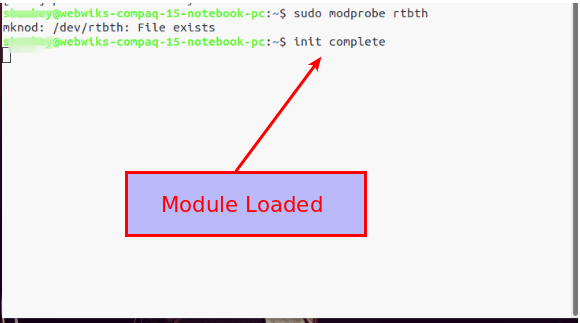 If the first command doesn’t works then toogle your WiFi switch on off and again type:

And, Press Enter, You will see your Wireless or Bluetooth light which indicates your rt3290 Bluetooth activated and you can now use your Bluetooth adapter.

Now, the final step is to autoload the rtbth module at startup which prevents you from activating the module at every boot. For that you need to add the module in modules.conf file.

All you have to do is to find Kernel module file and its Located in /etc/modules-load.d/modules.conf

You can manually Browse this file in Nautilus or any other file manager. All you have to do is to run File Manager in Terminal by typing the command:

It will open the notepad file of modules.conf  and after that enter rtbth at end of file (as shown in screenshots). 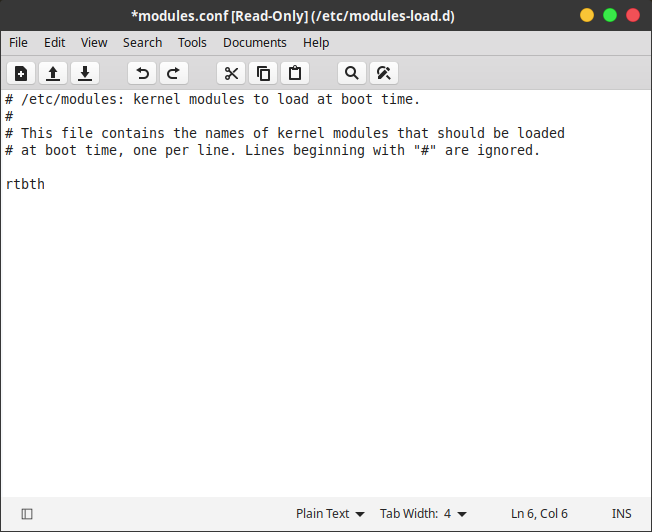 Just click on save and restart your PC and see if the modules load automatically.  If you find any issue regarding these steps please free to drop a comment in our comment box.

The Rt3290 chipset is itself bad, with unsupported and outdated drivers it has caused lots of problems not only with the Ubuntu/Linux distribution but to the windows as well. Due to discontinue support of some of their Wireless or bluetooth chipsets ralink has now become a limited choice for consumers.

Note: This method has a known issue i.e. whenever you close a lid of your laptop the Bluetooth module will stop functioning. The only way is to fix is to restart your computer.

How to install Any Ubuntu packages Without using PPA’s

July 31, 2018
We use cookies to ensure that we give you the best experience on our website. If you continue to use this site we will assume that you are happy with it.I AcceptRead more